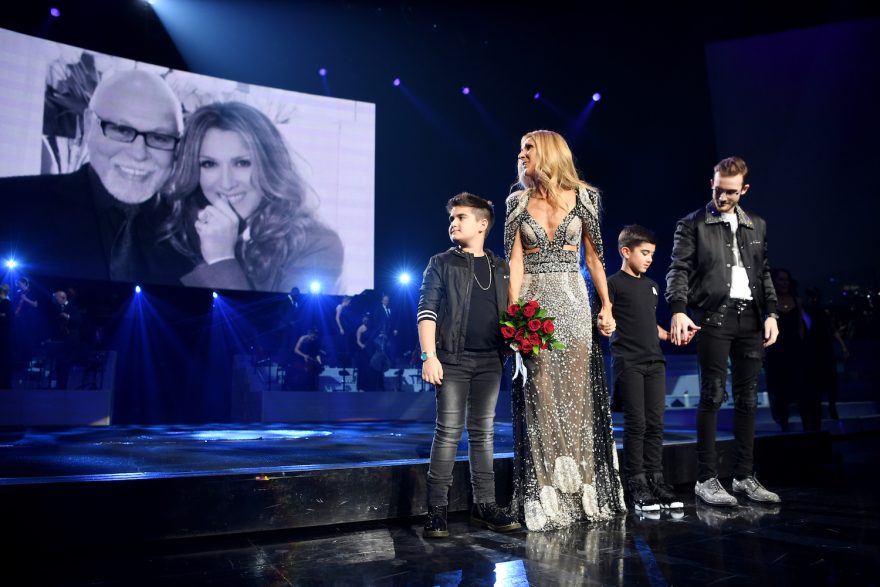 Critically-Acclaimed 16-Year Run Comes to an end after 1,141 Shows Playing to over 4.5 Million Fans

LAS VEGAS (June 9, 2019) –Last night, June 8, international superstar Celine Dion took the final bow of her iconic 16-year Las Vegas residency at The Colosseum at Caesars Palace. The sold-out crowd was treated to special moments throughout the show including a performance of Celine’s new song ‘Flying on My Own’ from her upcoming album, Courage, due for release in November of this year. View performance clip here. Touching moments included a photo collage backdrop set to ‘Somewhere Over the Rainbow’ featuring images from Celine’s Colosseum shows from the very beginning, and photos of Rene Angelil, her late husband and former manager, and their three boys, who also joined Celine and her longtime orchestra and band on stage during the emotional final curtain call.

“I’m both proud and humbled by what we’ve accomplished at the Colosseum since we began sixteen years ago, when René and I first shared this dream,” said Celine. “This entire experience has been a huge part of my show business career…one that I will cherish forever. I have so many people to thank, but the most important ‘thank you’ goes to my fans, who gave us the opportunity to do what we love.”

In March 2003, Celine Dion forever changed the landscape of Las Vegas entertainment with the premiere of her first residency A New Day… which played 717 shows from March 25, 2003 through December 15, 2007.  On March 15, 2011, she made a triumphant return to Caesars Palace with her second residency, Celine, which played 424 shows.  Across the 16 years, Celine performed 1,141 shows to more than 4.5 million fans at The Colosseum. The residency was presented by Concerts West/AEG Presents and Caesars Entertainment and directed by legendary Grammy Awards producer Ken Ehrlich.

“The incredible vision that Celine and Rene had almost two decades ago has completely re-written the history and future of entertainment in Las Vegas,“ said John Meglen, President & Co-CEO of Concerts West, a division of AEG Presents. “For this vision to materialize into a world-renowned success is remarkable and we congratulate Celine and her entire team, cast and crew. Caesars Palace has been an amazing home for Celine and her shows for all these years. We are honored to have been part of this extraordinary journey and excited for our future together.”

“For an improbable 16 years, Celine Dion has reigned as the Queen of Las Vegas entertainment from The Colosseum at Caesars Palace, the home we built for her pioneering residency. On behalf of all of my colleagues at Caesars Entertainment, and of course the employees of Caesars Palace, we want to thank her and her late-husband René Angélil, and our partners at AEG/Concerts West, for their faith that Caesars Palace was the right place for Celine Dion to draw her millions of fans from around the world to see her perform,” said Gary Selesner, president of Caesars Palace. “We also want to thank the musicians, singers, dancers, technicians, ushers and security officers for their selfless contributions to what will surely go down in history as one of the longest-running and most successful shows ever. While it’s sad to see it end, it’s also a moment of triumph for everyone involved, and clearly our hearts will go on, filled with memories of Celine’s stirring performances night after night after night at The Colosseum at Caesars Palace.”

Following the monumental end of her 16-year Las Vegas residency, Celine will embark on her COURAGE WORLD TOUR, kicking off September 18 in Quebec City and stopping in over 50 cities across the U.S. and Canada. The tour will be her first in the U.S in over ten years.  For tour information visit celinedion.com.

Vocal powerhouse Celine Dion is one of the most immediately recognized, widely respected and successful performers in pop music history. She won numerous awards by the age of 18, dominated the pop charts in 1990s and has sold almost 250 million albums during her 35-year career. She has earned five Grammy Awards, two Academy Awards, seven American Music Awards, 20 Juno Awards (Canada) and an astonishing 40 Félix Awards (Quebec).  She remains one of the most sought-after recording artists, receiving the Diamond award at the 2004 World Music Awards recognizing her status as the best-selling female artist of all time. In 2016 the Billboard Music Awards presented her with the lifetime achievement Icon Award. In April, Celine was named L’Oréal Paris’ newest global spokesperson.